You Need a Little Black Dress (You Really Do)

It’s the week of Valentine’s day, so I’m taking some time to talk about what the boys like.

You can insert you own man whenever I say “boys”, or you can just take a lot of notes if you’re single.

The whole idea for this weeks theme came to me last year when I was standing in a store, witnessing an exchange between a man and a woman (I assume they were husband and wife, but I don’t know for sure). They were both shopping in an upscale woman’s store, when the man spotted a little black dress. He held it up and said, “What about this? This is nice.” The woman immediately dismissed it by saying, “I don’t need that, where would I wear it?”

I can totally understand where she’s coming from. Sometimes we look at nice things and think they would just take up space in our closet. And sure, they probably would. But the look of disappointment that showed up on his face after she said that, made me sad for both of them. I’m not saying their marriage was in shambles, but I think she would have felt good if she would have bought something fancy like that, even if she wore it to Applebee’s. And regardless of where she wore it, he would have thought she looked beautiful.

That’s not the first time I’ve heard about husband’s saying they wish their woman dressed up more often. I know it’s surprising. Sometimes it can feel like we’re putting in all this effort and they’re not noticing. But I think they do more than we realize. And even if they’re not, dressing up would definitely get their attention. 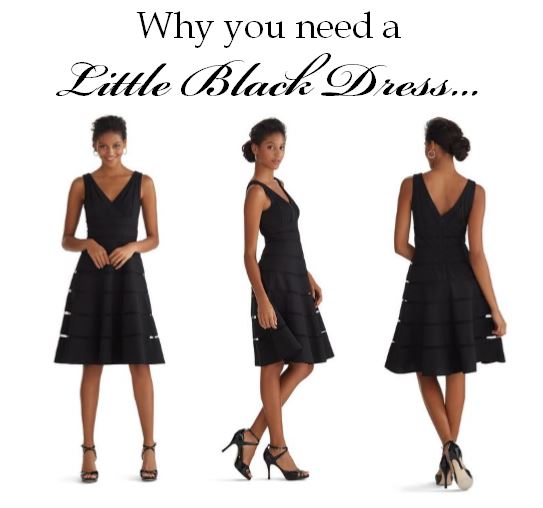 It’s from White House Black Market and I picked it because it’s pretty, flattering on most body types, and has a little spiff to it (it would also work for a wide range of ages, so don’t go thinking you’re too old).

The A-line shape is going to help hide a larger bum and hips, and the nipped in waste will help define you if you’re looking to disguise your mid-section. The v-neck draws all the attention to your face and when paired with the black, makes the whole thing very slimming.

Now I know a lot of women don’t want to wear sleeveless. This dress could totally support a cute cardigan. Something slinky – not librarian for cripes sake.

And with the sheer mesh panels at the bottom this LBD is anything but boring.

Listen, you’re going to feel so good in something like this, and he won’t be able to keep his eyes off you. If I could fake the really deep voice of the Men’s Warehouse guy I would and end with, “I guarantee it.”