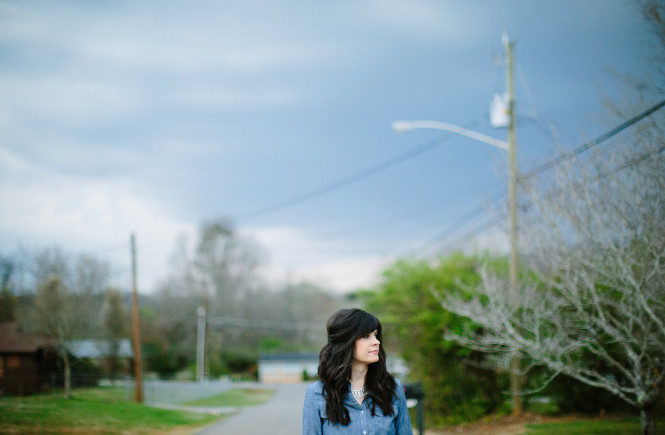 Let’s chat about loving ourselves.

If you have followed any of my content for any amount of time, you know that I’m not afraid to brag about myself. It’s done in a joking manner and the thought behind that is you don’t find many people who brag about themselves. Most often people are putting themselves down (especially women) – something I noticed a long time ago and wanted to change about myself.

I love getting to be who God created me to be. When I look in the mirror, I’m happy with what I see and thankful for the way God made me.

My first thought in writing that is how cocky it makes me sound (at first I wasn’t comfortable putting it in bold letters but I want it to grab your attention). Trust me, I can list off my flaws faster than you can say shoe sale. I didn’t get to being thankful for who I am overnight. It’s something I’ve worked at, studied scriptures on and pressed into for a good chunk of my life. And it pays off!

No the journey is not over. There are still days where I have to work at changing my thoughts about myself. But because the foundation of God’s word has been sewn into my spirit with verses such as, “I am fearfully and wonderfully made” (Psalm 139:14) or “God is the health of my countenance” (Psalm 42:5), it’s easier to shoot down those darts of self depreciation.

So I’m sharing this because I want to encourage you.

A birthday doesn’t have to be a dreaded thing – “He renews your youth like the eagles” (Psalm 103:5). It’s another year that you get to be you. The person that God uniquely created to reflect an aspect of His Being. Someone with particular attributes He wanted to show off in the form of YOU. Since we’re all created in His image and we’re all so different it only makes sense that He uses people to show off different aspects of Himself. So celebrate what He put together in you!

Don’t fear or dread growing older, but look forward to the wisdom and experience of another year that you bring to the table.

And if for no other reason – enjoy being you because of this verse. This particular verse The Spiff is founded on because helping women love who God created them to be is the passion that drives my efforts…

Luke 14:11, “…if you are content to be simply yourself, you will become more than yourself,”

I want to be more than myself because that means I’m tapping into the supernatural “me” God had in mind all along. Let’s do it together! 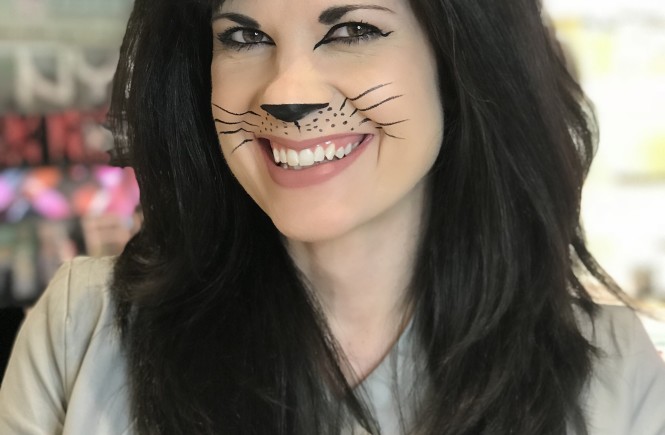 Dress up your face.

It’s ironic that every year I provide these ideas, but I rarely dress up myself. Once I ran out of brunette TV characters I enjoyed watching, EO out!

But that doesn’t mean I won’t still provide YOU with some fun easy costume ideas.

I love these makeup looks because they’re easy and cost effective – in fact you can spend as much as you want on them! So here’s the deal..

Go to Dillard’s at West Town Mall and find The Edge, which is the beauty counter next to Clinique where they have a bunch of different brands. Ask for Marissa and schedule an appointment with her. When she does your makeup all you have to do is buy 2 or 3 products. And the great thing is they have a wide range of price options AND a wide range of things you need. I mean come on, what woman has a hard time finding something to buy at a makeup/skincare counter? Not this one I can tell you that.

I think having your face done up for a costume is a great way to go because you can keep the rest of your look pretty simple. You already look elaborate, so why stress over your clothes?

Here are the looks she gave me… 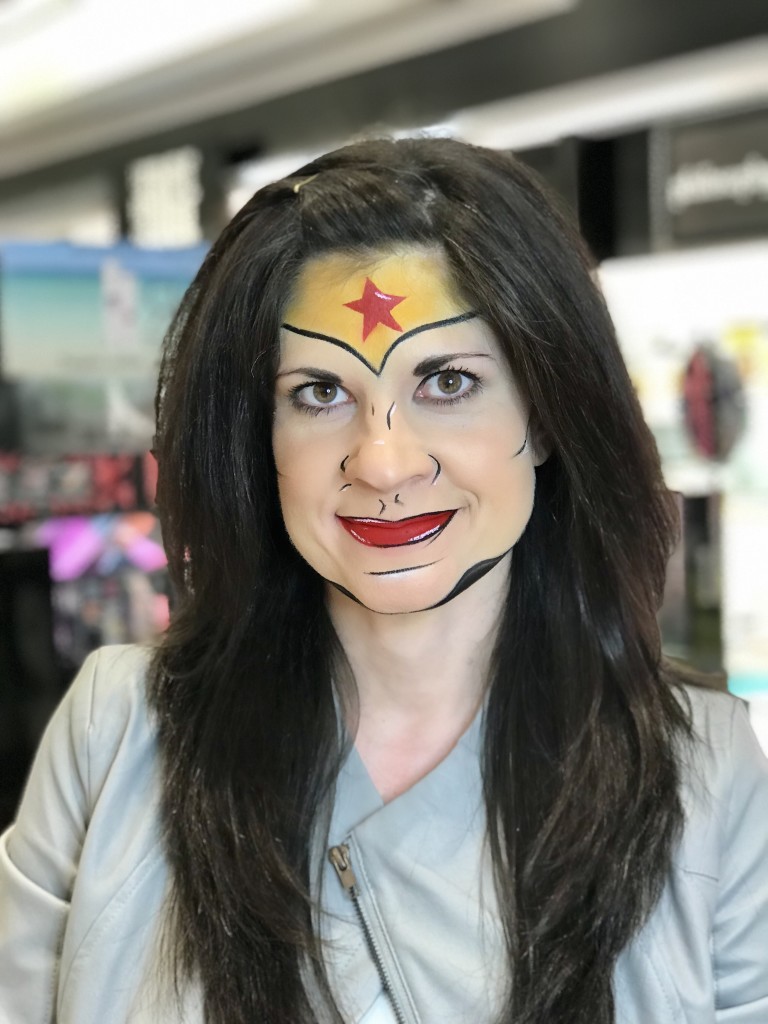 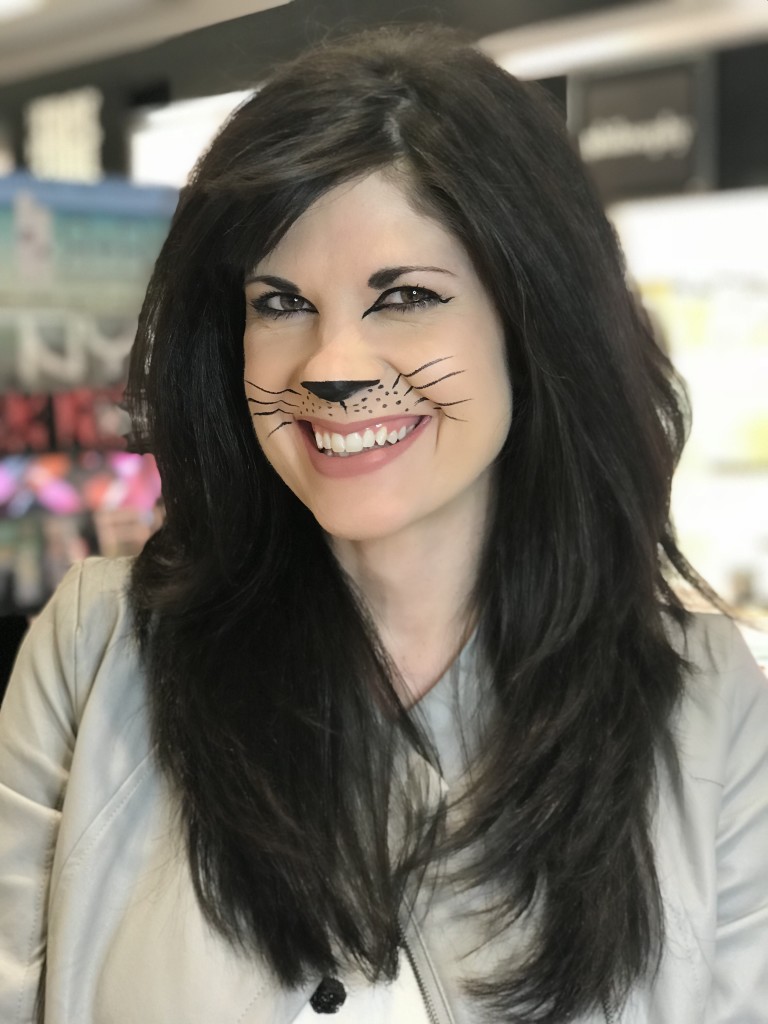 And these are one’s I showed her from pictures on the internet so your options are endless!

She is so talented and super nice, not to mention knows how to do regular makeup as well – so schedule an appointment with her today!

What are you waiting for?! 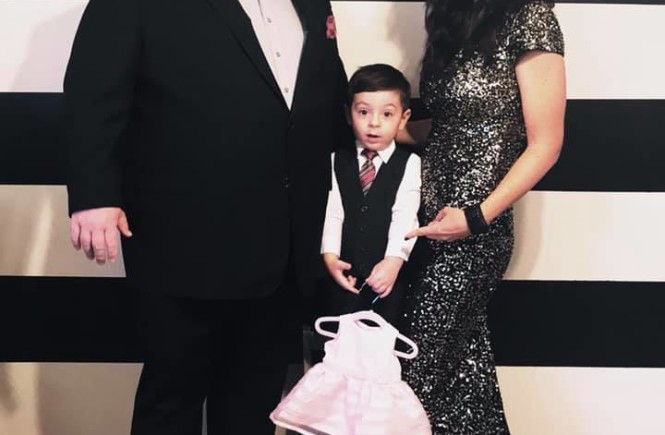 When I say we’re going to need a bigger closet, I mean it. 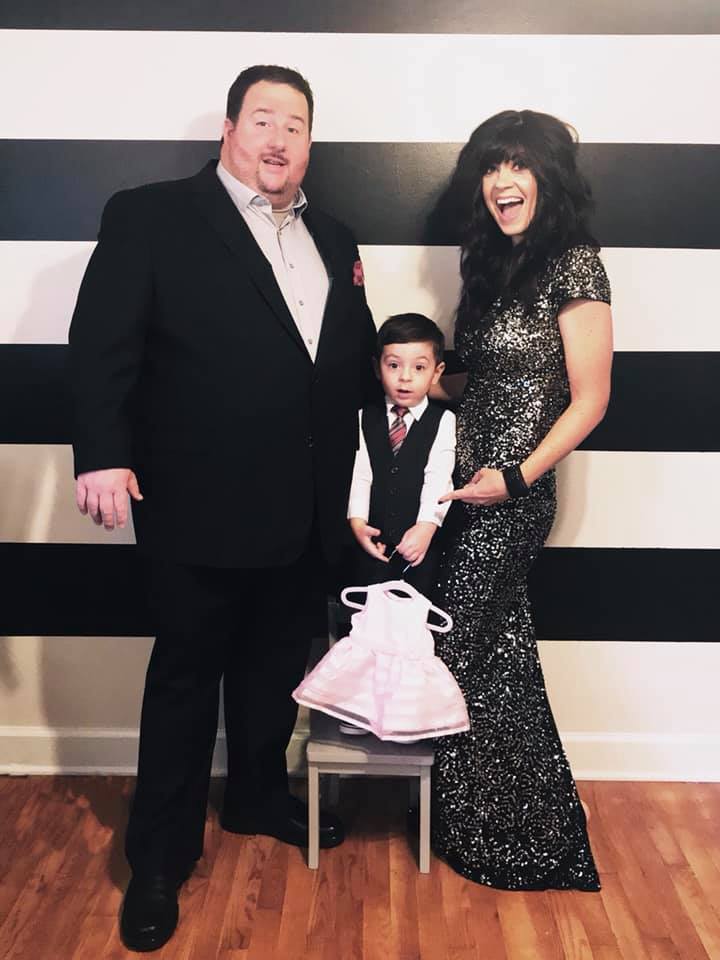 This week we announced news we’ve been relishing in ourselves for almost three months now – we’re having another baby!

I was excited to get all the details out at the same time – the fact that it’s a girl and her name is Elianna (middle name TBD).

The idea that I’ll be dropping “Dude” and Dinosaurs for “her” and bows (also TBD, haha I’m trying to work up a love for bows currently) is still settling in, however, she is truly an answer to prayer and I am resting in the fact that God will equip me to be a mother to this little sweetheart.

I’ve had this name picked out for over 15 years – before I even knew my husband. In Hebrew it means, “God has answered.” And boy, is that spot on! We’ve been believing for another baby and He has answered in the perfect way.

There’s so much more I can say but I’m still in processing mode so it’s not coming out as smoothly as I’d like.

Thanks for stopping by and sharing in our excitement! 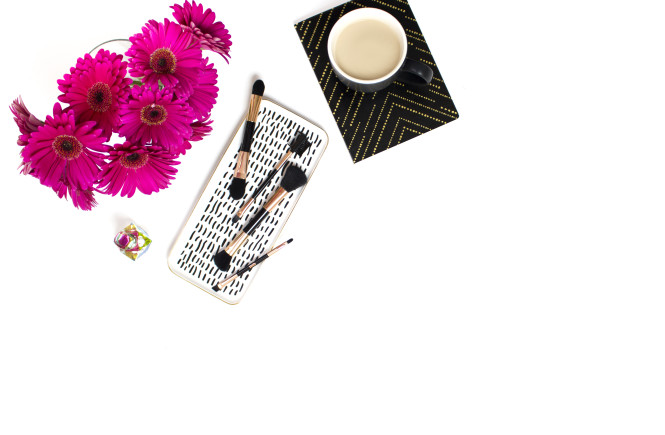 Currently there’s a big emphasis on hair. Particularly the hair around your eyes – full eyebrows, full lashes. Basically, if you make lashes and eyebrow toupees you’re sitting in high cotton…finally.

Let’s focus on lashes for today…

There are so many options out there from magnetic lashes (more on that later) lash extensions that you get filled in about once a month, and serums. All of which can cost you anywhere from $50 – $150 and beyond I’m sure.

My thoughts on the serums and things that you put on your lashes for “natural growth” are this… While I’m not saying I’ll never try them, I’m hesitant to do so because well, it’s going near my EYES. But also because I like being able to add drama for special occasions. And while having longer-than-life lashes every day would be glorious (gosh, skipping the mascara portion of my makeup routine would have me doing praise hands), I like being able to switch up a special occasion look with fuller lashes.

Having said all of that, I did have some stubby lashes on my right eye that I wanted to fix. I don’t know why but in the middle of my eye there was a small band of lashes that held hands and decided to stop growing. It always annoyed me when I put on my mascara and I wanted it fixed.

I did some research and saw that rubbing Vaseline (or petroleum oil) on your lashes causes them to grow. I thought I’d give it a try, so I put a big ole’ tub on my night stand and started rubbing it on my lashes before falling asleep.

Turns out – it works! ALL of my lashes (including that rebellious clique) are now longer and fuller. I love putting mascara on because it emphasizes how nice and full they look.

Now, it’s not a DANG GIRL YOUR LASHES ARE POKING ME IN THE FACE type of growth, but it is noticeable enough that I could tell it really works. And I probably rubbed Vaseline on them for two weeks when I started seeing results.

I wish I had taken some masterful before and after photos, but it’s hard to nail that kind of thing. Just know, I’m loving the results and I believe you will too.

All you have to do is take some Vaseline in between your fingers and rub it on your lashes!

Cheap and safe – sounds good to me!

Want some tips on applying false lashes? I’ve got you covered!

Have You Been to The Edge? 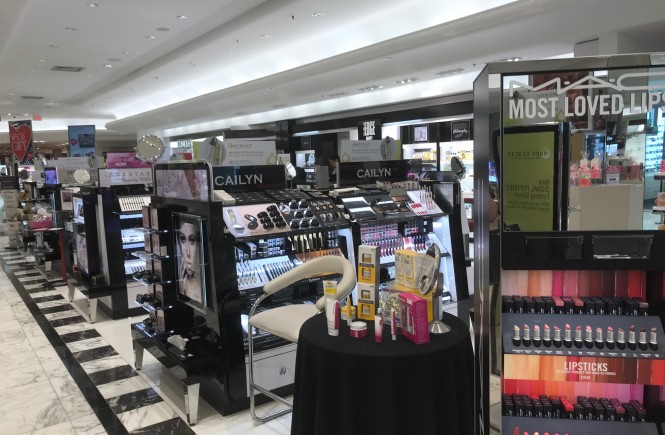 You’ll want to live life there (get it?…on “the edge”) 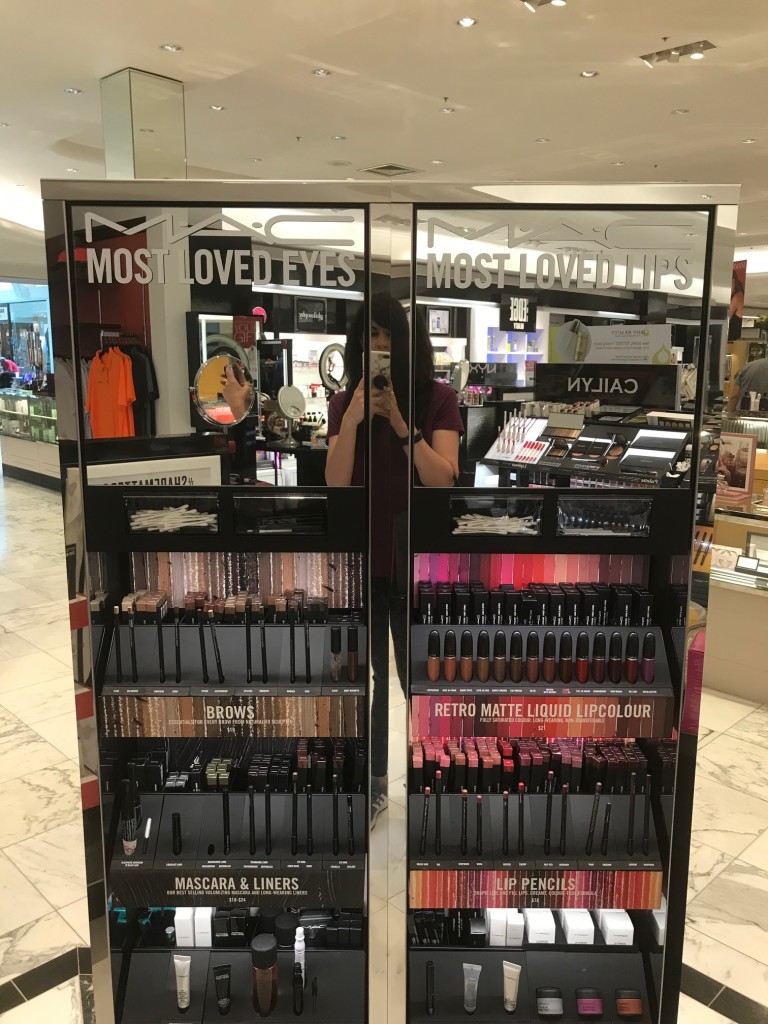 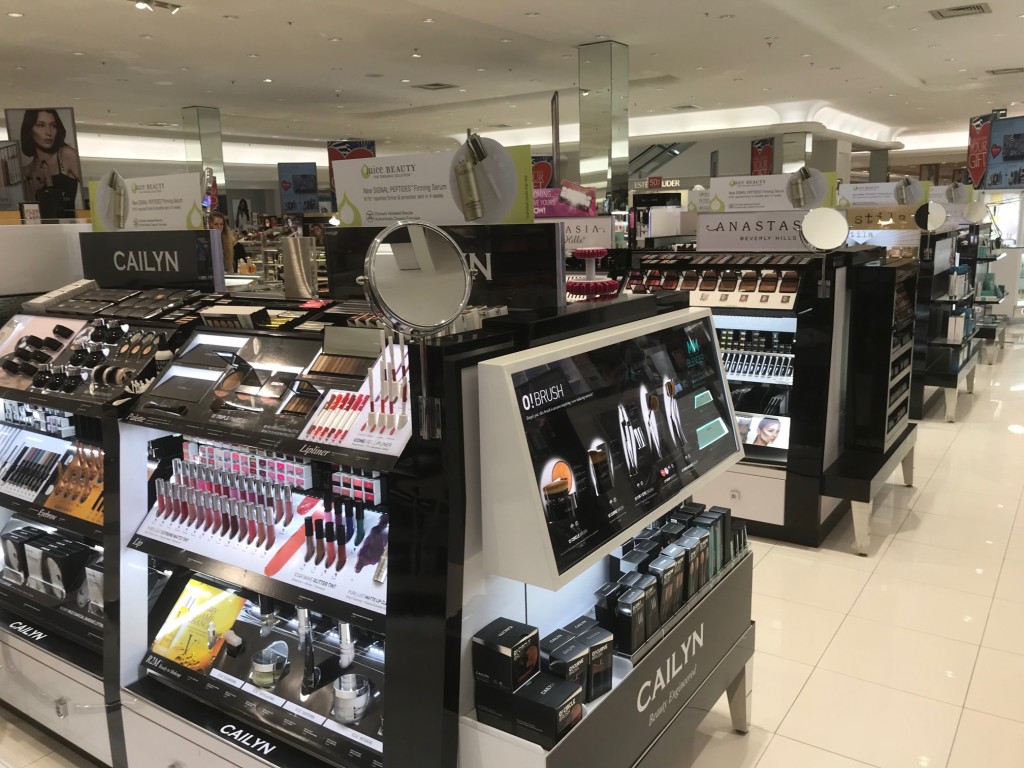 It doesn’t matter how many reviews you read, or how many YouTube videos you watch, there is nothing like going and shopping for things in person. Touching the product, even trying it out. Hearing from a LIVE person why it will or won’t help your skin type. It’s just such a more personalized experience – no clicking required.

Which is why I’m thankful Dillard’s has the beauty experience called “The Edge.” Located inside their beauty department, The Edge features a number of brands that are hard to find anywhere else in person, and great customer service by people who are makeup freelancers on the side – so they know.

My favorite part is they offer classes and training! Yes please! A lot of the tips and tricks I’ve learned came from good ole’ fashion classes in the mall. Years ago MAC offered them periodically and I learned A LOT by going to those. In fact I use a lot of those same tips today!

They have one coming up on August 27th that is at two different times – one in the mid-morning and one in the afternoon. The cost is $45 – but that goes towards buying makeup – which you’re going to want to do after hearing how to use everything and how certain products can help you look and feel your best.

Go check out the Edge and say hello to Aryn (pronounced Erin), Marissa, or Audrey! They are all super nice and will be happy to help!